Many of you have asked about the Prides of shape shifters in my books.

Yes I have many Prides. The Prides are families of cats, so of course there are many.

The Pride Brothers Series - Arious Pride- The Knight Watch princes. This is the main Pride in this series although, there are many other Prides featured in this series, Doucheron, Lioness and Lonza Prides  all live within the Five Gates.

Then the Pride Brothers of the future.... The Vane Pride.... in Shifters & Demons...I introduce you to scorching alpha male shifters, same goddess and yes Nox will be in this series...he is immortal.

Then I have the Ecatnie Pride from the future in the Chronicles of Fae: Delicious and Pure Hot Sin in the Bite Here Anthology.

OUT NOW IN PRINT From H.C. Brown

Now in Print from Amazon and Barns & Noble 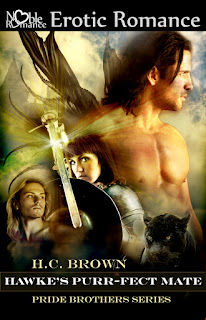 Labels: Out IN PRINT

Readers Round Table review for Delicious by H.C. Brown

Delicious: The Chronicles of Fae by H.C. Brown

Summary:
Dumped in the Nomag (human) world by his future realm, Ecatnie Pride parents, Ryland Strange is doing okay, using magyck to win at the casino. On the way home one afternoon, he collides with a guy walking along the sidewalk. He takes the hot, sexy Lor to his house to recover. They have an instant connection until Lor tells Ryland he is not of this world.
Jaymes’ Review:
Delicious: The Chronicles of Fae by H.C. Brown is a wonderful take on the world of the Fae. Ryland and Lor are wonderful.

Ryland’s surprise at learning that he’s Ecatnie is tempered by his surprise over Lor being Fae and the world he’s taken to. He’s completely out of his element in the Other World but likes the idea of how open everyone is. He doesn’t understand everything especially Lor’s reticence in sleeping together.
Lor has been watching Ryland for a few years to make sure he’s Ecatnie. Over this time Lor has fallen in love with Ryland and wants him for his mate. But Lor is afraid to trust completely in Ryland.
There were moments I wanted to smack both characters but I also wanted to see more of their relationships not only with each other but with others that are introduced along the way. I think Delicious: The Chronicles of Fae would have been more fun and enjoyable we had seen more of Lor trying to deal with his issues than having them explained by Ryland and Nox. Overall, this is a wonderful story and H.C. Brown has brought this world to life.
Rated 3 1/2 Gold Crowns by Jaymes!

http://thereadersroundtable.com/erotic/?p=115
Posted by H.C. Brown at 9:48 PM No comments: