If you thought August was hot, you ain't seen nothing yet! Noble Romance authors Bryl R. Tyne, H.C. Brown, Brita Addams, KevaD, J.S. Wayne, Lucy Felthouse, Sarah Ballance, and Jess Anastasi are teaming up to melt the winter blues, your monitor, AND your inhibitions with the "Timeless Desire" blog tour. Featuring blazing-hot interviews and excerpts, as well as a whole new collection of novellas guaranteed to fire up your libido or warm your heart (and some might do both!) from some of the newest and your all-time favorite authors at Noble Romance, you won't have any trouble keeping warm this November!

RUNNER UP PRIZES:
PRINT COPIES OF COMPLETE COLLECTION
ONE M/M TIMELESS DESIRE ANTHOLOGY
AND ONE
M/F TIMELESS DESIRE ANTHOLOGY
BOOK VOUCHERS - Donated by Noble Romance
Fantastic prizes from Sex Toys.
Authors will be giving out prizes daily.
All you have to do is to comment to go into the draw.
Tour kicks off 8 November.
Details here:
http://nobleromanceauthorsblogtour.blogspot.com/
Posted by H.C. Brown at 11:50 AM No comments:

Drop by to chat. 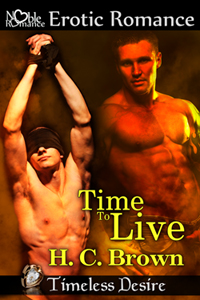 Thank you for making Time to Live #1 Best Seller on Noble Romance Publishing.

Time to Live Out Now

Great news as part of the Noble Romance Blog Tour  Timeless Desire Collection, I am please to announce Time to Live  is OUT NOW


I have 3 autographed covers to download onto your e-reader to give away, to celebrate.