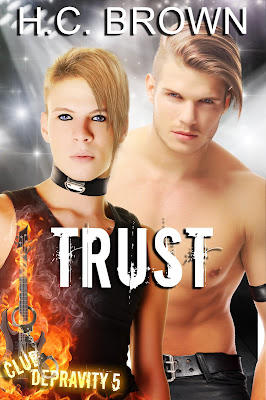 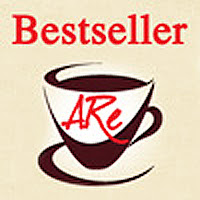 Joel Moon gave everything to his rock star Dom, Reef Anderson and his partner Rhys—the Dom his Master likes to F**k. His Masters had taken his innocence, his virginity, and he’d learned the meaning of trust and submitted completely and oh, so willingly in their edge playing ménage scenes.

Oh yeah, he understood Reef’s craving for the limelight, his need to please his fans but kissing Syn, the new guitarist of Cold Heat, on stage then dumping Joel at the venue to face the media alone wasn’t part of the bargain.

Will he ever trust Reef again?

After discovering his Dom had spent the evening at Club Depravity with Syn, Joel has only one choice—to ask his twin Jackson to fix things “Jackson style.”

Jackson Moon paced the nursery floor, his son’s sleepy head resting on one shoulder. He’d allowed Rogue to sleep after the final performance of Alpha Rock’s long concert tour. The interstate agenda had pushed both of them to their limits. Taking their infant son on tour had sounded like a good idea but baby Jack did not enjoy life in a hotel or traveling from gig to gig. Home at last, the baby refused to settle, his big blue eyes searching the room, and his chubby hands clinging to Jackson’s hair.

The intercom from the apartment building’s foyer buzzed, and Jackson glanced at the clock. Who the fuck disturbed them at two in the morning? He moved through the sitting room and went to the front door. He pressed the button on the receiver. “Someone better be in a pool of blood, to disturb us at this hour.”

“It’s your brother, Mr. Moon, says it’s a matter of life and death.”

He opened the front door and waited for the elevator to arrive. The ping announced Joel’s arrival. His brother emerged clothes rumpled, his face white, and tear streaked. He frowned at him and lowered his voice to a whisper. “Whatever it is, keep the hysterics to a minimum, Jack is almost asleep, and I don’t want him disturbed.”

Joel pushed a lock of blond hair from his damp eyes. His face held an expression of rejection so deep it made his stomach cramp in sympathy.

“Sure, I’ll wait until you put Jack down.” He gazed at the baby and a small smile lifted his lips. “He is so damn beautiful.” He flicked him a glance. “You don’t know how lucky you are.”

“I do, and we’re expecting more luck in about seven months, the surrogate took. They used my sperm this time, but it makes no difference, Jack is just as much mine as Rogue’s now we’re married.” He strolled toward the kitchen. “Can you make some coffee and I’ll see if he’ll settle down now?”

He moved along the hallway and into the nursery. Jack had fallen asleep at last and he placed him gently in the cot. He turned and opened the door between the bedrooms. Rogue will hear him if he wakes up. He wondered what had brought Joel out at this time of the morning. Hell, Reef would be on an adrenaline high after his concert, being the lead singer of the rock band Cold Heat and would probably be looking for a scene with his brother. He returned to the kitchen and his heart gave a jolt, Joel sat head in hands sobbing. “Oh fuck, what happened. Are you okay do you want me to wake up Rogue?”

Joel flapped a hand at him, then lifted his head, and gave him a look of pure desolation.

“Have you met Cool Heat’s new base guitarist, Syn Clearwater?”

Jackson raised an eyebrow. Rogue had mentioned the twink with the chocolate eyes and described him as a bitch on heat. He nodded and his stomach gave a clench of apprehension. “Yeah, I gather he’s seeking an extreme edge player Dom. Rhys mentioned him to me the other day too, said it was good Rogue had married me.” He snorted. “Fuck as if being married would keep it in his pants. It’s up to me to keep my Master happy.” He rubbed his fingernails on his shirt then blew on them. “And I do.”

“Yeah? Well I thought I was pleasing both my Doms but on stage tonight, Syn rubbed all over Reef, and they kissed—on fucking stage right in front of me. Then that asshole, Syn gave me a look that said, ‘he’s mine, fuck off.’”

Jackson poured two mugs of coffee and slid one across the table to his brother. This was going to be a long night. “So what happened next? Reef is crazy about you and what did Rhys say about all this?”

Joel lifted his chin, and one tear rolled down his cheek.

“Rhys is out of town on business and I can’t reach him.” He sucked in a shuddering breath. “Reef had someone call me a cab then left with Syn for Club Depravity.” He lowered his lashes. “He said, I shouldn’t wait up because he was going to be busy all night. He fucking left me there at the venue like a used tissue.”

Jackson stood then went to his twin and rubbed his back. He found it hard to believe, Reef would take another sub over Joel. Fuck, the ménage was a match made in heaven. Taking a deep breath, he let it out on a long sigh. “The problem is, bro, you’re not streetwise like I am. Trust me I know how to bring a Dom to heel.” He smiled. “Dry your eyes, because I already have a plan and one that will give switch play a whole new meaning.”

Buy at All Romance 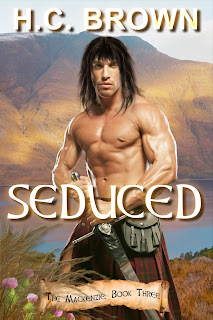 After escaping a pirate ship and an unwanted betrothal to a French baron, Lady Adrianna Beechwood may well be safe on land but is alone with a band of smugglers running from the law in the wilds of Scotland.
Finally reunited with the love of her life, she is distressed to find a rugged Highland warrior has replaced the refined, stylish Drew Mackenzie she fell in love with in London.
With her betrothed’s men hot on her heels, she must flee with her Highlander, but will their love survive the troubles to come?

Chapter One
Adrianna hobbled from the small room in the castle ruins with one arm draped across Betty’s shoulder for support and gaped at Drew in astonishment. Dressed in a clean shirt with his plaid attached to one shoulder by an exquisite brooch and a glistening claymore strapped to his back, short sword strapped to his waist, there could be no doubt of his position in the clan. Drew straightened to his full impressive height at her entrance and rested one hand on the gold handled dirk at his waist. He held an aura of respect and was defiantly not the vagabond barbarian he led her to believe.Her Highlander was indeed a chameleon, for before her stood a confident Highland warrior as did the tall handsome man standing beside him. Drew’s gaze drifted over her and a glimpse of the man she met in London surfaced for a brief moment before his expression hardened to one of disinterest. An act for his clan no doubt.She glanced over the restless group of clansmen and all to a man glared back at her grim-faced. A shiver of apprehension slid down her spine. By the wave of Anglophobic hatred directed toward her, Drew had informed them of the trouble her presence would cause. The grunts and Gaelic mutterings combined with unusual hand gestures from the men clearly indicated their attitude toward her. To be sure, they would have preferred if the fever had taken her.Limping the short distance to stand before him and ignoring his less than welcoming manner of his men, she offered him the letter. She had detailed the reasons for escaping Lord Moreau and informed her father of her reasons to remain in Scotland without mention of Drew or her whereabouts. She had folded the paper neatly and placed her father’s direction in bold print on the front then sealed the missive with a crude blob of soot-streaked candle wax. “I do hope this will set matters straight.”“As do I.” Drew took the letter and broke the seal eyeing her with a steady confident gaze.She gaped at him in disbelief and grabbed at the paper in his hand but to no avail. At the twitch of a smile on his lips, indignation rose and she glared at him. “Laird Mackenzie, I find it hard to believe you have the effrontery to examine a private note to my father.”“Effrontery is it to keep ma clan safe or maybe I am too canny for ye, aye?” Drew gave her such a look of disdain that she took a step backward. He grabbed her arm drawing her around to face him. “Do ye really think I would be stupid enough to allow anyone with enough information to see us hanged, free reign to inform Lord Beachwood of our whereabouts, and destination?” His gaze moved over her face assessing her. “If ye are so against me reading the contents of your correspondence, ye must have something to hide.”
Posted by H.C. Brown at 12:30 PM No comments: