After her handsome Scot is forced to leave London, Lady Adrianna’s father arranges her betrothal to a French Baron known as The Murderer of Muzon. She reluctantly boards his vessel and finds herself on a pirate ship under the perilous protection of an opium smoking deviate, by the name of Monsieur Moreau.
With the captain, hell-bent on her seduction, the feisty goddaughter of George II’s only chance of escape lies in the hands of her courageous Scottish warrior.

Outside, the wind had dropped and at last, some semblance of normality prevailed. Lady Adrianna’s attention went to the sound of splashing in the passageway. She tensed and reached for a damp cloth to press against the throbbing pain in her brow.  What now?
She collapsed in the chair and leaned her head into the soothing coolness of the wet rag.  As a shadow approached the doorway, the outline of Betty came into view.
“There you are, milady.” Betty negotiated the dim entrance with a basket in one hand, shoes, and stockings in the other.
Relief flooded over her. “Oh thank heavens. I thought I had lost you.”
“I found myself stuck fast in the galley and had to wait for the bad weather to pass. The cook says the storm has blown itself out for now, so I have brought a bite to eat.” Betty smiled. “I will wait a bit for the men to pump the water from the hallway then I will go back for a pot of tea.” She shut the door and placed the tray on the table. “We are lucky the cabin has that step to keep the water out. The floor in here is practically dry. Now what is amiss? Are you quite well, milady?”
“I will do but I have had a fall and hurt my head, and my right leg is quite sore too.” She leaned back in the chair. “Thank God, the ship has stopped pitching back and forth. Perhaps now we may light a lamp or two.”
“Goodness, I should never have left you, milady.” Betty placed the basket on the table and went at once to light the lamp. She turned, lifted the lantern, and stared at her mistress wide-eyed. “You are soaked through and filthy to boot. Did Monsieur Moreau have anything to do with this?”
“No! He did not lay a finger on me but the man is a beast, and we are to refer to him as ‘Lord Moreau’ from now on.”  She squeezed the rag into a ball in the palm of one hand. “He made my position very clear.”  She narrowed her gaze at Betty then went on to give her details of her disastrous situation and explaining Drew as Lord Rupert’s trusted friend.
Betty’s dark eyes rounded and her mouth turned down.
“Oh, milady.”
Adrianna pressed the back of one hand to her aching head. “I trusted my father to assure my safety and respect my wishes concerning Baron du Court. I was sorely mistaken.” She stood to allow Betty to unlace her sodden gown. “Unless I have help from Mister Mackenzie, I do believe it will take a miracle for me to escape from Lord Moreau.”

Do you love an exciting, heart wrenching Highlander romance?  I do and it was a joy to write this series. A secret love affair,  forced marriage, kidnapping,  pirates, and a  handsome Highlander rescuing a damsel in distress. What more could you ask for? Oh yes, the pages will sizzle, after all this is written by H.C. Brown :-)

Join me on an exciting journey of love and devotion, set in Georgian England and the wilds of the Scottish Highlands in

Book one Charmed is available now, Betrayed and Seduced are available on Pre-order. 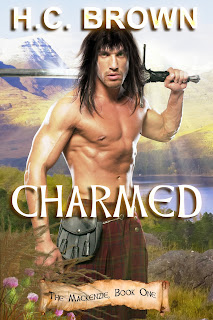 Highlander Drew Mackenzie’s double life as a respectable gentleman and the notorious, smuggler, Le Diable Noir, comes into jeopardy the moment Lady Adrianna Beachwood’s father rejects him as a suitor. He devises an ingenious deception to meet her in secret by using his cousin, the respectable, Lord Rupert as a decoy.

Nothing goes to plan and when the feisty goddaughter of George II is thrust into danger, her only chance of survival lies in the hands of her courageous and deliciously handsome Scottish warrior.

https://play.google.com/store/books/details/H_C_Brown_Charmed?id=sRqjCgAAQBAJ&hl=en
Posted by H.C. Brown at 3:14 PM No comments: