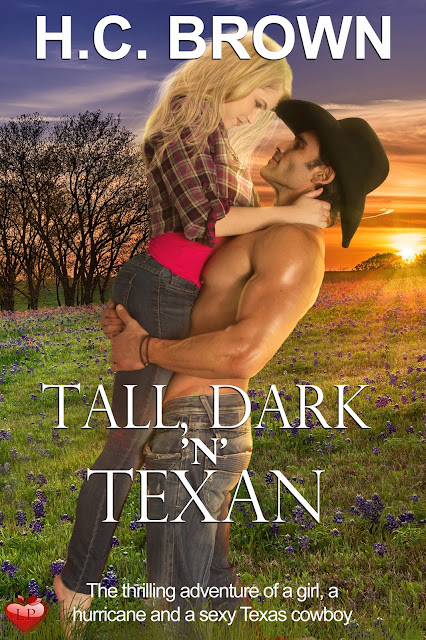 When a handsome cowboy rescues Susan Blake from drowning, her life changes forever.
Branch Durham, a tall, sexy, Texas cowboy is way out of her league, but when he invites her to lunch, she jumps at the chance of getting to know him better, but a hurricane is approaching fast. With every exit road blocked, she takes Branch up on his offer of a safe haven to ride out the storm.
The woman Branch found on the beach intrigues him. Susie is fiercely independent, a little clumsy, and naïve, but she has no idea he is a Country and Western megastar with a ranch and oil fields in Texas. Being with her is refreshing, and for once, he can be himself without perpetuating his bad boy image.
As the hurricane intensifies turning the area into Armageddon, Susie’s dream of a new career managing her father’s condominium complex is shattered. She realizes she has no place to go and her future has blown away with the building.


“I’m here at last.” Susan Blake squeezed her toes into the sand and stared out across the sparkling ocean. Her attention caught by a single surfer sliding down an impressive swell. Hmm, those waves didn’t look quite so big in the brochure.
The local news channel had given ominous warnings of a hurricane approaching the area, but apart from a line of dark clouds on the horizon, the sun shone in an expanse of blue sky. The danger appeared to be miles away and ignoring the little voice inside her head screaming, “Danger” she stepped into the foaming water. Swimming in the rough sea would be fine if she kept to the shore break. She refused to allow anything to spoil her day and splashed into the surf. What could possibly go wrong?
Chilled water hit hot flesh, and she gasped catching her breath. Undeterred she waded in waist deep, jumping the waves crashing around her. The next surge ripped her off her feet and exhilaration turned to dread in a millisecond. She fought the rip, but Neptune’s arms reached out to seize her. Ferocious waves dragged her out to sea crashing over her and filling her mouth with salty brine. Eyes stinging and thrashing like a woman possessed, she bobbed up between waves choking and stared around to get her bearings. Oh, shit! Endless rolling ocean met her gaze and then as the swell lifted her, she caught sight of the beach for a split second before a wall of water hid the coastline from view.
Terrified, she caught the next wave but rather than taking her toward the beach, it carried her out to sea. Fighting against the swell was useless. With each stroke forward, the ocean dragged her deeper into its inky depths. Desperate to keep her head above water, she kicked hard and aimed for the shore, but the strong undercurrent swirled around her dragging her down like quicksand.
In a tremendous roar, another wall of water crashed over her. Helpless against the massive strength dragging her into a swirling mass of choking oblivion, she tumbled arms flailing. Her head struck the sandy bottom. Sharp pain radiated through one temple and bubbles rushed past her eyes spilling precious oxygen from her mouth. Unlike the stories of people drowning at sea, her life did not flash before her eyes, and she had no pangs of regret for a life lost. Instead, a calm descended on her and time slowed. I’m drowning.
Above, the once picture-perfect sunny day offered intermittent peaks of light through the swirling sea. Hopes of starting a new life in Florida crowded her mind. Anger flashed, and she would be damned if she would give up and become another statistic. Determination sent a rush of adrenaline flooding through her. Get your act together, Miss Blake, you did not come this far to die. Lungs bursting, she pushed straining muscles to the limit to break free of the current and popped up like a cork in the surf. Dragging in great gulps of air, she caught a wave and swum for the beach. Water smashed her dragging her back again. Thinking all was lost, she bobbed helplessly on the surface and then with another loud roar, the merciless sea picked her up and dumped her on the beach. Disorientated, she forced aching limbs to drag her from the water but another wave wrapped like a whip around her legs and she slid helplessly along the shore break.
Grabbing at anything for a handhold, she dug her fingers into the sand. The beach blurred before her and eyes stinging, she blinked wildly at the shadowy figure looming in front of her. Sliding between a pair of long legs, she looped her arms around one muscular calf clinging for dear life. The stranger gripped her arms in his strong hands and lifted her to her feet. Gasping and weak with shock, she stared through a veil of wet hair into the face of the most delicious man she had ever seen in her life. Deep blue eyes shaded by a black Stetson examined her face. I’m dead and in the arms of a dark angel. Oh, shit, do fallen angels wear black cowboy hats? I might have guessed I would go straight to hell and not pass go. She turned her head and coughed, spluttering out a mouthful of salt water. When a deep Texan drawl poured over her like warm honey, her knees buckled in relief.
“Hello, darlin’. Don’t worry, I have you.”
Oh, my God, he’s real.